Speaking at the launch, Deputy Minister Magwanishe said Microfinish is evidence that the Black Industrialist (BI) Programme is succeeding and transforming the economic landscape of the country.

“Being one of the beneficiaries, Microfinish alongside 16 other black industrialists manufacturers will inject R1 billion and create 2400 direct jobs and 1700 indirect jobs in the KwaZulu-Natal region. It also contributes to improved production efficiency, job creation and global competiveness,” said Magwanishe.

Magwanishe also said that the project strengthens the capability of components manufactured to support the automotive sector. He congratulated Toyota for giving market access to Microfinish as one of their suppliers.

“We are confident that KwaZulu-Natal provincial initiatives, such as Operation Vula will continue to pay a positive role in providing procurement opportunities to other Black Industrialists. Therefore, in our BI projects lies a renewed affirmation in job creation and social economic transformation,” added Magwanishe

Speaking at the same event, the Managing Director of Microfinish, Mr Brian Naidoo said as a company, their social objective is to invest in the development of our staff, increase employment in South Africa and support the localisation and empowerment initiatives that have been mandated by government.

“Hard work, dedication, commitment and financial support are what it has taken to get this facility up to the world class standard that is today. The international exposure received through interventions and collaboration with the dti is indicative of the expanding footprint South Africa has in the global market. Microfinish is grateful for this as most of our business is export,” said Naidoo.

He added that the company is eager and have an appetite to service national business partners and they are happy to report that collaboration in this regard is on-going.

“We hope to report on securing partnerships in the not too distant future and strengthen relations in the local market,” he said.

The BIS is a grant programme of the Black Industrialists Policy that aims to unlock the potential within black industrialists operating in South African economy through deliberate, targeted and well-defined financial and non-financial interventions.

Issued by: The Department of Trade and Industry

MMC for Finance to Improve Revenue Collection in Joburg

On Tuesday the 27th of June, member of the Mayoral Committee for Finance Cllr. Rabelani Dagada hosted a stakeholder engagement session at Joburg Theatre.

On his presentation, Dagada talked about the ways that they are going to implement as the Group Finance Department of Johannesburg to improve revenue collection in the city. He also mentioned that the department has several measures to address the Rates Policy and Tariffs problem that they are currently facing.

“The two big things that keep me awake at night; the billing problem is number one. Number two is revenue collection,”said Dagada. “We cannot ignore the fact that challenges in our billing processes have reached crisis level.”

During the month of March this year for the first time in the City of Johannesburg, the City collected R3 Billion, which exceeded the City’s revenue budget.

“We need the City that has a robust infrastructure and that services are delivered on time. We want Johannesburg economy to grow by 5%,” said Dagada.

Dagada compared Johannesburg to Cape Town by saying that the actual reading per month in Cape Town is around 95% coverage compared to Johannesburg which is less than 50%.

“We are targeting 95% meter reading by March next year and we are going to establish something called Revenue Nerve Centre, where Joburg Water, Pikitup, City Power and Group Finance will look at the revenue chain,” said Dagada.

The Revenue Nerve Centre that they are planning to establish is going to monitor the performance of the revenue value chain, detecting revenue loses.

Group Finance Department is also going to take over the responsibilities of reading meters from Joburg Water and City Power.

“Better metering management and bringing missing meters into the billing system will increase the revenue by 900 million to 1.2 Billion.” said Dagada.

He went on to state that as the department, if they are quick enough they will recover R200 million in the current valuation roll.

“There are properties that are overvalued, we are going to introduce a supplementary valuation panel and improve the capacity of the valuations department,” he added.

In conclusion, Dagada said that as the department they are committed to bring quality services to the residents of Johannesburg.

South Africa marks National Youth Month in June under the theme “The Year of OR Tambo: Advancing Youth Economic Empowerment”.

Ministers and Deputy Ministers will engage in various activities aimed at promoting youth development and empowerment. The President launched Youth Month with a meeting of the Presidential Youth Working Group which brings together government and leaders of youth organisations, which took stock of progress done thus far in the socio-economic advancement of young people.

The government youth engagement activities are as follows:

Movie screening in Phillipi (Kalushi) public awareness about the role of Solomon Mahlangu in the struggle for liberation, a session on child protection and cyber safety
Communications Deputy Minister, Ms Thandi Mahambehlala
Venue: Phillipi community in Western Cape, movie to be screened at Ster Kinekor, Claremont

Dialogue with the youth around issues of social cohesion and the importance of youth developing society. This is part of the youth month build-up activities
Arts and Culture Minister, Nathi Mthethwa
Venue: North West University, Mafikeng

Issued by: The Presidency
Pretoria 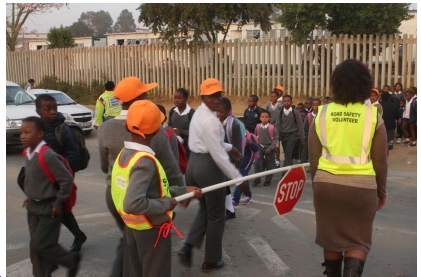 The Gauteng Department of Community Safety in partnership with South African Police Service (SAPS) and Johannesburg Police Department (JMPD) held an awareness day where they were teaching members of the public about the road safety on Wednesday 10th of May. This awareness day is also a result of United Nations’ Global road safety week, which started on Monday the 8th of May until Friday the 12th.

“This week is actually UN Global road safety, so we decided to come to Cosmo City, because we noticed that the behavior of the taxi drivers had become hazardous.

Most of the Avanza taxi drivers do not have licenses and they do not respect pedestrians or the safety of their own passengers”, said MonkieRammala, Senior Road Safety Officer. “We decided as the department to visit the area and do awareness speaking to the taxi drivers and owners,” he added. There have been numerous complaints from passengers and other road users, about how Avansa taxi drivers conduct themselves when driving. Although some of the complaints have been addressed, the parties involved still believe that awareness is a necessity for the taxi drivers. “It is the responsibility of a driver or any individual to respect rules and regulations of the roads. It start with you as an individual, you have to respect other road users. We should not need to bring law enforcement to tell people what the right thing to do is, people should know that they should do the right thing, and that starts with respect” Said Rammala Randburg United Local and Long Distance Taxi Association (RULLDTA) were invited to the awareness day. NgwokoMokoala , who is the spokesperson for the association said that they working effortlessly to make their drivers to comply with road laws. “We as the association, have a disciplinary office.

Whenever we get a bad report about a certain driver, they go through the disciplinary committee,” said Mokoala. When taking about a situation whereby other taxi drivers drive without licenses, Mokoala said that whoever the owner of the taxi decides to employ is the responsibility of the owner not the association. “Taxi owners should take responsibilities for their drivers. All the Toyota Avansa’s that belong to the association have an association sticker,” he added Officer OomaMorudi from JMDP stated that as the department they will be working closely with the association, “We are going to be having programs in taxi ranks teaching both taxi drivers and the commuters about their safety. In regards to commuters we will focus mostly on the precautions methods that they should be aware of, in terms of their safety,” said Morudi. “If we work together with them, we will be able to educate them bettter.

That is the kind of relationship we have between the association and the JMPD in the area.” On the day, Scholar Patrollers in Both Cosmo city Primary and Junior Primary were launched. Angola Street is one of the busiest streets in the morning at Cosmo City, traffic is being caused by the taxi rank that is near the schools. This includes parents and school transport drivers who drop off kids in the morning.