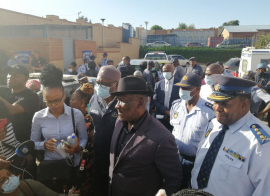 President Cyril Ramaphosa has expressed concern at tensions in Diepsloot, adding that government is monitoring the situation.

Speaking on the sidelines of the 2022 Heads of Mission Conference (HoMC22) on Thursday, the President told journalists that government is keeping a close eye on the situation.

“We will not condone any form of criminality which results in the death of anyone. It is not acceptable and we will take action to deal with it,” he said.

The President said government is engaging with the community.

“We are continuing to keep a very close eye and also engaging with various members of the community because we don’t want that situation to turn into an ugly one.

“So, we are consulting on all sides, the people who live there in Diepsloot and also listening very closely to their concerns but we will not condone any criminality,” the President said.

This as the South African Police Service (SAPS) heightened its deployment of specialised units and resources to restore law and order in the area. Extra resources were mobilised in the form of vehicles and boots on the ground following protests that erupted in the area on Wednesday.

In addition, a search is also underway for an unconfirmed number of suspects who allegedly used the protest as a cover-up for criminality and killed 44-year old Elvis Nyathi during the early hours of Thursday morning.

“Police were patrolling the area on Wednesday evening when they came across the incident where the suspects attacked the deceased and set him alight. It is reported that prior to the incident the group had been moving from house to house claiming to be searching for criminals and demanding either passports or money.

The deceased is said to have ran out of his house and the group gave chase, caught up with Nyathi and killed him. The suspects evaded arrest after fleeing the scene,” the police said in a statement on Thursday.

A multi-disciplinary task team of detectives is probing Nyathi’s killing. Anyone who may have information on the identity and whereabouts of the suspects, is urged to report by calling the Crime Stop number 08600 10111 or via the MySAPS app that can be downloaded onto any smartphone. All information will be treated with the strictest confidentiality.

It had been reported that seven people had been killed in the area over the course of the weekend.

“At this point, police can also confirm that according to Diepsloot SAPS record of reported cases, only five (05) murders were reported between Wednesday, 30 March and Sunday, 03 April 2022. These murders emanated from separate unrelated incidents and investigations are still underway to arrest the suspects. This is contrary to  the seven murders that have been reported in the media.”

Meanwhile, new National Commissioner of the SAPS, General Fannie Masemola has reiterated his commitment to ensure the rejuvenation of functional Community Policing Forums, and strengthening relations between communities and the local police.

“In response to the Diepsloot community's complaints about crime in the area and the ensuing protest, General Masemola, together with Police Minister, General Bheki Cele, have visited the area daily this past 48 hours, engaging with community leaders and community structures towards finding a lasting solution that will heighten the community's sense of feeling safe and secure,” said the SAPS.

The police cautioned members of the public against inciting violence and against taking the law into their own hands. –SAnews.gov.za