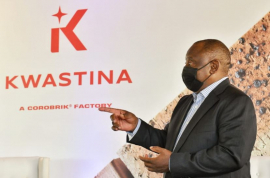 President Cyril Ramaphosa says the public sector and private business can come together to form productive partnerships which can accelerate South Africa’s economy and create jobs.

The President was speaking at the opening of the Corobrik Kwastina Brick Manufacturing factory at Driefontein, in Gauteng, on Tuesday.

The factory is a manifestation of an initial R800 million investment pledge made by the company during the 2019 South African Investment Conference.

That pledge has now grown to R1 billion with the company pledging a further R200 million to expand its KwaZulu-Natal based concrete facility.

“At the 4th South Africa Investment Conference in March this year, I said that we want to see investment commitments fast being turned into projects. We want to see foundations being sunk, to hear the sound of bricks being laid and seeing cranes dotting the skyline. We want to see factories being built and production lines being expanded. We want to see people being employed and skills being developed.

“And here today at Kwastina we are seeing the fulfilment of such investment commitments. Here today, we are seeing the results of the R800 million investment pledged by Corobrik at the 2019 South Africa Investment Conference. This investment is an example of the productive partnerships that have been forged between business and government to grow our economy and create jobs,” the President said.

The President highlighted that the fact that the company is a local one supports government efforts to empower and support local enterprises.

“[Corobrik] has made a significant contribution to our efforts to extract greater value from our natural resources, by making its bricks from raw materials extracted from South African soil. This is an important part of government’s efforts to support localisation, supplier and enterprise development, as well as empowerment.

“As we proceed with the implementation of our infrastructure plan, the demand for building materials will grow substantially. It is our intention that as much of these materials as is possible should be sourced locally,” he said.

President Ramaphosa hailed the local company for doing well despite the devastating and detrimental impact COVID-19 has had on the South African economy.

“We are an economy that was devastated by COVID-19. Much as we sought to manage COVID-19 and navigate our way around its dangerous paths, we still lost two million jobs. For an economy like ours which was precariously positioned over a number of years to lose two million jobs in just a twelve month period is quite a devastation.

“And we are very pleased that as we begin to recover, we have companies like Corobrik who are living up to the commitments they made and are creating jobs and making sure that our economy moves forward. Corobrik is making a vital contribution – in a very literal sense – to rebuilding South Africa’s economy,” President Ramaphosa said. – SAnews.gov.za